Chad Hurley, the founder of YouTube, knows when to strike right. It has just been announced that Chad has been working on a company called GreenPark Sports, and it is about to launch in Spring 2020. Chad has mentioned several times that the way we enjoy sports and participate in games will change quite drastically, and the new startup is likely going to monetize on that. In fact, some reporters suggest Chad has been looking to create what might come after fantasy sports.

Most sports fans are connected on social media, the act of watching a live sports event is intimately connected with streaming on social media and engaging with other sports fans. In other words, being a sports fan is no longer a passive existence, but an active role in which technology and social media play major roles. GreenPark’s executives are all from a sports background. Take for instance Nick Swinmurn, who kick-started Zappos. The startup is funded by Founders Fund, Sapphire Sports and SignalFire, all of which are big names in the sports world.

GreenPark Sports helps fans insert their experience into the gameplay

As sports events increasingly center on fans and how they perceive a game, GreenPark is likely to focus on identity creation and identity engagement of sports fans. Likeminded fans can congregate on GreenPark and gamify the act of being a fan. one could even go as far as declaring that GreenPark might become the Tinder of sports fans, where fans with similar interests can engage with each other and participate in games in real-time.

In addition, GreenPark Sports is already touting its game and encouraging fans to “destroy the other teams’ fans”. This free-to-play game will likely monetize via apparel, avatars, and merchandise. As most people are getting tired of action games and fantasy-oriented game ply, a game that puts being a sports fan into the center of gameplay will probably find more takers than one might imagine.

Recognizing a shift among gamers

Chad understands his audience perfectly, and his new venture reflects the disillusionment of gamers who are slowly going back to traditional sporting events. Only, GreenPark Sports turns fandom into a game and allows sports fans to play against each other. The game’s closed beta is expected to launch in Spring 2020, and it has already gained a lot of interest among gamers. Would you be interested to play GreenPark when it launches for the public? Do let us know in the comments section below. 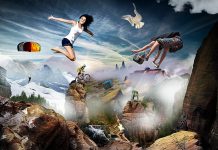