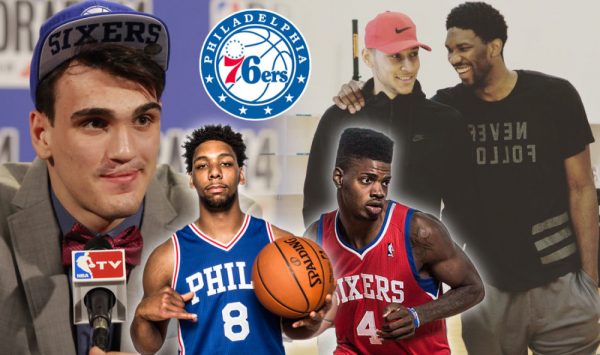 Two questions need answering by the Philadelphia 76ers as the head into the 2016-2017 NBA Season: Should tanking continue to be their strategy, and out of their big men crop that includes Joel Embiid, Ben Simmons, Nerlens Noel, Jahlil Okafor and Dario Saric, who should stay and who should leave?

For now, everyone is staying. Remember, there are only 48 minutes in a game, one ball, and the Sixers are extremely weak in their backcourt. Maybe the most important figure in this is Bryan Colangelo, whose return through the back door to a general manager position with the help of his father raises other ethical questions about how NBA franchises are run and how much pressure the league, Adam Silver and other owners caring about shared profits apply on failing teams.

But we’re about basketball, and Colangelo, at least right now, seems like someone who thinks about winning a little bit sooner than Sam Hinkie. Like Hinkie or not; believe in his process or not, the Sixers under him were miserable to watch, even for some of the most avid fans of team building, with ultimate patience. Ratings were at an all-time low for Sixers game, and as someone who believes that a winning/losing culture is something real, three years of hitting rock bottom.

But seriously, how do the Sixers and Brett Brown make this work? I guess it’s a waiting game. They’ll wait and see what happens with Embiid and if he’s the next Greg Oden or a real, dominant, franchise-type center? They’ll wait and see if Simmons is as special as some of his games indicate, and whether or not he can actually play 3 positions. They’ll wait and see for Dario Saric to show he was worth waiting for while he was honing his skills in Europe. They won’t be too patient with Okafor and his terrible defensive game, and they’ve probably given up on his offensive game to catch up with his solid defense.

Besides these guys, and however the Sixers plan on putting them together, Gerald Henderson and Robert Covington seem like the best options to get points from the backcourt and wings, unless Nik Stauskas suddenly makes a 180 and shows his place in this league. Their point guard situation is probably the worst from the 1-2-3 positions. This is a team on hold. Maybe not tanking anymore, but still unclear regarding their direction.

Figuring out their players quickly. Seriously. They’re not going to make the playoffs. So finding an answer to who are the big men they’re going to keep, and maybe even using some of them to land a good point guard sounds like an improvement. Stockpiling prospects and draft picks is great, but teams were made to win basketball games, not mess around while waiting for the right ping pong balls. The Sixers deciding they’re ready to win some basketball games is probably the best news this season can produce.

There can be nothing worse than the Sixers going through another season of 65 losses (give or take) and still not having a clue about who their key players for the next few years are.