The hot streak of the Golden State Warriors didn’t disappear in the weekend, carried by a big Kevin Durant game to win against the Milwaukee Bucks on the road. Meanwhile, the Los Angeles Clippers defense helped them win again, this time at home against the Chicago Bulls despite trailing until midway through the fourth quarter.

Utah Jazz 102  Houston Rockets 111: The Jazz continue with their poor form and another bad shooting night from Gordon Hayward, while James Harden completed a 31 points, 10 assists double double without any turnovers. Eric Gordon and surprisingly Clint Capela helped out, scoring 20 points each.

Charlotte Hornets 116  New Orleans Pelicans 121: The Pelicans are finally looking respectable, winning three out of their last four. Anthony Davis was huge as usual with 38 points, but the bench contributions of Langston Galloway and Jrue Holiday, combining to score 45 points, made the real difference.

Miami Heat 114  Washington Wizards 111: Two of the most disappointing teams in the East had plenty of points to go around. The Wizards were all about Wall and Beal combining for 68 points. Turns out it wasn’t enough against six players in double figures, including 22 from Goran Dragic and 18-18 by Hassan Whiteside.

Dallas Mavericks 87  Orlando Magic 95: The Mavs continue to look terrible, even Harrison Barnes with just 11 points on 3-for-13 from the field. The Magic endured a rough night from most of their starters, led by D.J. Augustin with 18 points off the bench.

Boston Celtics 94  Detroit Pistons 92: The Celtics have really missed Al Horford, and his follow shot with 1.3 seconds on the clock won the game for Boston. He looked great with 18 points, 11 rebounds and 5 assists, while Isaiah Thomas, as usual, led Boston scoring 24 points.

Phoenix Suns 105  Philadelphia 76ers 120: A big 27-point performance by Eric Bledsoe wasn’t enough, as the Suns were unable to contain Joel Embiid with 26 points or even Nik Stauskas, ignoring the trade rumors and finishing with 21 points off the bench.

Minnesota Timberwolves 71  Memphis Grizzlies 93: The Timberwolves fall to 1-5 away from home with a horrendous performance, shooting 39% and turning the ball over 16 times. JaMychal Green led the Grizzlies with 19 points. Zach Randolph had 18 off the bench. 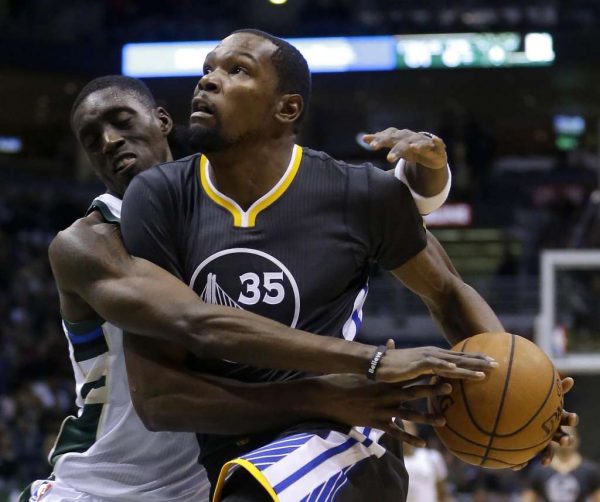 Golden State Warriors 124  Milwaukee Bucks 121: The Warriors are now on a 7-game win streak, led by Kevin Durant with 33 points. Stephen Curry was bad with 1-for-11 from beyond the arc, but Klay Thompson helped out scoring 29. The Bucks had Giannis Antetokounmpo with 30 and Jabari Parker with 28. Their assisting crew just wasn’t good enough.

Chicago Bulls 95  Los Angeles Clippers 102: The Clippers defense held Chicago scoreless for over 2 minutes in the final quarter to turn the game on its head and grab the lead. Blake Griffin was big with 26 points and 13 rebounds, Dwyane Wade led the Bulls with 28 points, including five 3-pointers.