Although anything can happen between now and the beginning of the NBA finals, it’s safe to assume that both conference finals series, the one in the East (Celtics vs Cavaliers) and the one in the West (Warriors vs Spurs) won’t go to the maximum of 7 games.

Which leaves with only one more series potentially going the distance. The NBA finals, which happened to go all the way last year, and in 3 other occasions since 2003, when the 7-7-7-7 format was implemented for the first time.

This takes me to another comparison between this postseason and other playoff series of the last 14 years: Is it just me, or are we sorely missing series going to game 7? Without looking at numbers, I would say yes. But after going over the playoffs of 2003 through 2016, it turns out that this season isn’t that far behind. Yes, we’re getting 0 upsets in playoff series. The Cavaliers are going to be the lower seed that beats the #1 seed in the conference finals, but that’s only an upset on paper. The only other lower seed winning their series in these playoffs are the #5 Utah Jazz over the #4 Los Angeles Clippers. Again, only on paper. 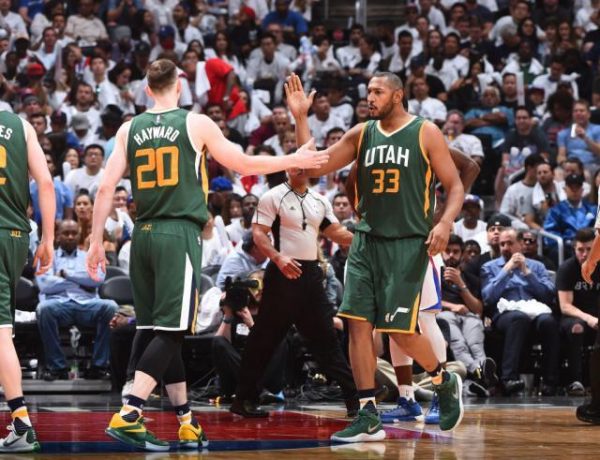 As far as game 7’s are concerned, the average of series going the distance in the previous 14 years is a surprising 3.14. We’ve never had a playoff without a game 7 in that time, and only in two of the years we’ve had just one game 7. In 2007, the year the San Antonio Spurs won the title for the 4th time after sweeping the Cavs in the finals, the only game 7 came in the first round when the Jazz beat the Houston Rockets. And in 2011, the year of the Mavs’ first NBA title, the very young Oklahoma City Thunder needed 7 games to go through Memphis in the conference semifinals.

The playoff series with the most game 7’s have happened recently. In 2014, we had 5 series going the distance. The Spurs might have won the title in 5 games against the Heat, but they needed 7 games to beat the Dallas Mavericks in the first round. All the 7-game series that year went down in the first round. Last year, the year of the Cavs, was another playoffs with 5 seven-game series, including the Finals between Cleveland and Golden State and the Western Conference finals between the Warriors and the Thunder.

So this year, with just one 7-game series so far, is lower than the average, but not that rare of an occurrence. As far as lower seed having the upper hand, it happens 3.78 times in each playoff. The rare occasions of hardly any upsets was in 2008, when the only lower seed to win a series were the San Antonio Spurs in the conference semifinals, beating the New Orleans Pelicans. In 2006, 2007 and 2013 there were 5 such occurrences each year. This season we are on our way to 2 if the Cavs complete their series win over the Celtics, and perhaps 3 if they beat the Warriors in the NBA finals, assuming both teams make it.