Too easy, and they weren’t even that good on offense. Led by an effortless masterpiece from Kevin Durant, the Golden State Warriors took a 1-0 lead in the 2017 NBA finals, beating the Cleveland Cavaliers 113-91 in game 1, making LeBron James look old.

If in the last two Finals series James was easily the best player on the floor regardless of the outcome, it might finally be different. Durant looked dominant on both ends of the floor, finishing with 38 points, 8 rebounds and 8 assists and most importantly (as we’ll dive into a bit further), 0 turnovers. When you compare it to LeBron James’ 8 turnovers (hurting the impressive stat line of 28-15-8), it’s hard to argue the claim that Durant had an almost perfect performance. 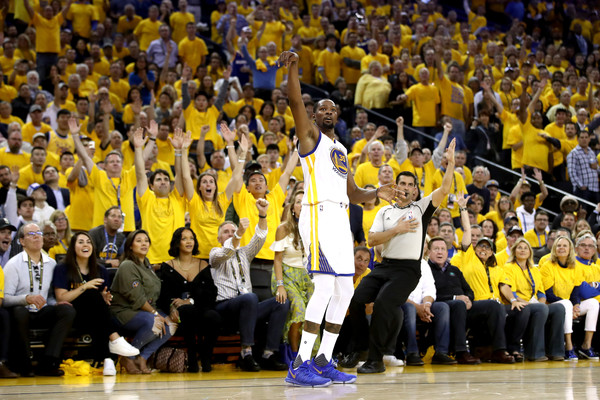 Durant stood out not just with his offense, hitting 14-of-26 shots and nailing three 3-pointers; his defense was terrific. It’s such a difference from his knack for taking plays off on defense. It’s much easier with so many players who can help and cover for you. Durant guarded LeBron James at times, and was the only player James didn’t really take to the hoop. The one time he did, Durant blocked his shot. It happened in the second half, when James looked tired, maybe deflated.

James didn’t play badly, and neither did Kyrie Irving (45% from the field, 24 points). However, when their teammates make only 25% of their shots and worse, only 8-for-28 on uncontested shots, an OK’ish night from the team’s two best players isn’t enough. The Warriors held the Cavaliers to just 34.9% from the field, 61 points in quarters 2 through 4, and scoreless for almost 6 minutes in a stretch that began late in the second quarter and well into the second half, enabling to build a 20-point lead which the Cavaliers managed to challenge, but never really threaten. 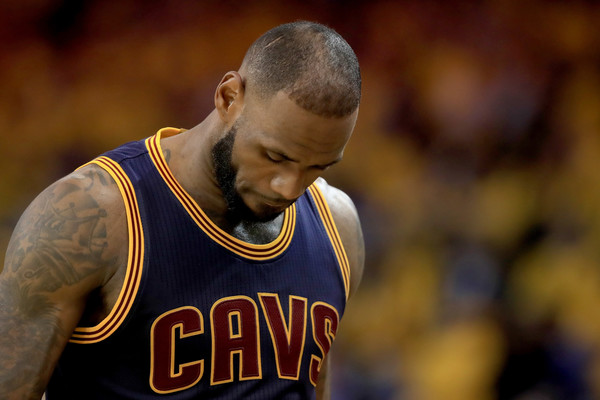 A play the Cavaliers struggled with in particular was the Durant & Curry pick-and-roll. The Cavaliers don’t have the “zone” defenders the Warriors do, or the Spurs had in Kawhi Leonard, capable of disrupting the Warriors offense. The Warriors seem learned enough from other losses this season to know not to fall into individualistic streaks which ruin their big advantages over other teams. Even with Green and Thompson shooting poorly, their defense and ability to trap and guard multiple players, something the Cavaliers simply don’t have, exhausted LeBron and Kyrie while making life difficult for their little helpers.

The Cavaliers gave up 21 points off their turnovers (20 overall) and 27 points on the fast break while not recording a single steal. They didn’t make it difficult enough on the Warriors on both ends, losing physically and showing very limited intelligence or motion when they were with the ball. Yes, the Warriors might be the most talented team ever assembled, but the Cavaliers are better than what they showed after the first quarter – starting with LeBron James, and down to Kyle Korver and the shade of Deron Williams, a wisp of what he used to be.

Saying it’s over and that the Warriors are going to sweep their way through the finals after just one game would be irresponsible, stupid even. However, it won’t be surprising if we won’t see the Cavaliers capable of competing for 48 minutes until the series turns to Cleveland. Meanwhile, the Warriors have time to think about the things they didn’t do well. Yes, they can actually play better than this, which is quite a scary thought, whether you’re a Cavs fan, or simply want to see a close series.