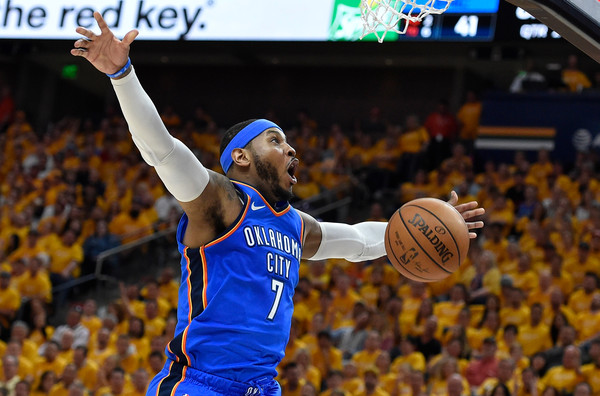 In his first playoff series since 2013, Carmelo Anthony is proving all those that criticized the Oklahoma City Thunder for making the trade that landed him right.

Anthony, who has been on a clear decline for the last four or five seasons, is hitting new lows with the Thunder, and not because he has to share the ball with two other players who love it in their hands. In the series, Anthony is averaging just 14.3 points per game on 37.3% from the field (his career playoff shooting is just 41.5%). The Thunder are worse off with him on the floor by 16.2 points per 100 possessions.

While his 3-point shooting in the last few years, including this season, has hovered around 35%, he’s shooting just 23.1% from beyond the arc in this series, which isn’t stopping him from shooting the ball more and more: He was 0-for-6 in the Game 4 loss to the Utah Jazz, and is hoisting the ball from three 6.5 times per game in this series.

But enough statistics bashing. Anthony isn’t the sole blame for the Thunder being one game away from elimination, and he very well may bounce back in the next game and help the Thunder claw their way back into the series. But the curves and directions are clear – have been for a number of years: Anthony, the superstar, the All-Star (didn’t make it this season for the first time since 2009, is gone. What’s left? A washed up scorer with no real motivation to defend, move the ball or do much besides… shoot the ball. 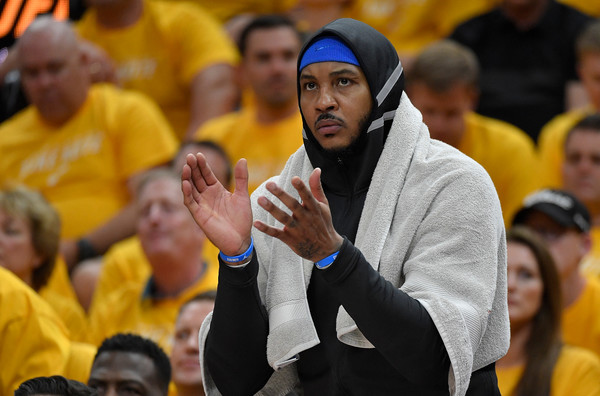 Anthony’s trials in Oklahoma City put into perspective his failure to do much with the Knicks in the last few years, peaking with a conference semifinal appearance in 2013, one of only two postseasons in which he was able to get past the first round (the other in 2009, WCF while still with the Nuggets). Less on the team, more on him in hindsight. It gives another clue of how dysfunctional the offense in Oklahoma City is. How Billy Donovan hasn’t changed much from the Scott Brooks days. How Russell Westbrook can’t evolve, change and tone his game down. What Kevin Durant meant to this franchise. And Sam Presti’s role in all of this.

Maybe Anthony will make all those criticizing him eat their words in game 5 and going forward, but right now, he’s in a tough spot, just like his team, knowing the almost 34-year old forward has a $27.9 million contract next season. He has an Early Termination Option, but it’s very unlikely he actually opts out considering his past decisions when it came to choosing between a good situation and more money.

Championship? Not this season, not as a leading player. Never? We can’t say that, because Anthony, at some point, is going to accept his new position and role in this league. And for someone with his ego and status (at least in his own eyes, and still for some fans’), it’s not going to be easy making that mental switch.