Well, this is for the hitters – 6 of our favorite football hard hits.

Sheldon Brown on Reggie Bush –  The playoffs of the 06 season, Bush gets blindsided by the Eagles CB, and needs more than just a breather to get up from that one. 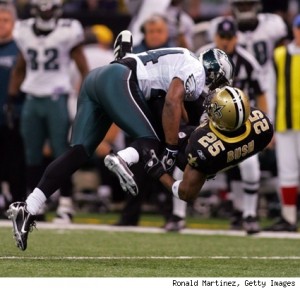 Sheldon Brown is involved yet again in a great hit on a Running Back, this time the Rams’ Steven Jackson. While Jackson isn’t taken out by this hit, his helmet is popped right off, which gives this hit it’s viewing value.

Now to another hard hitting Eagle – Brian Dawkins. Brian Dawkins has long been known to be one of hardest hitters in the NFL, and after a couple of seasons that seemed to have Brian slowly giving away to age an time, this 08 season has been a very good one for the man called “weapon x” or “wolverine”. This is my favorite of his, on Mussin Muhammed of the Panthers. Not because of the strength of it and the fact the Muhammed is a big guy, bigger than almost any back or linebacker, but because he stopped a Touchdown by pounding no. 87 into the ground. When the big hits become plays that deny points, they’re much better.

This one comes from Ray Lewis. No. 52. He’s a 2 time Defensive player of the year, so we know he’s no slouch. Lewis’ form has been declining the past few years, and has been enjoying a favorable media opinion on his game that’s based more on his past ability and less on today’s, but he’s still a solid LB who can bring on the pain when needed. Alongside his knack for joining in on his teammates tackles and quite often getting the stat credit for them, he does occasionally still come up with a big and important hit, like this one on former teammate Jamal Lewis.

And the final word goes to dearly missed player, Sean Taylor, may he Rest in peace. Although at least 50% of Sportige are Cowboys fans, Sean Taylor was one of the favorite players for all of us. A unique talent, and here’s a little taste of what he could do(Beside spit in the face of Michael Pittman)

This is one is the dream hit for every defensive player – a punter trying to run and gunning straight at you. It sounds cool in Japanese too.

And this final one is from his college days, that sends the receiver flying high and dropping the ball.

2 responses to “6 NFL Hard Hits for your Viewing Pleasure”