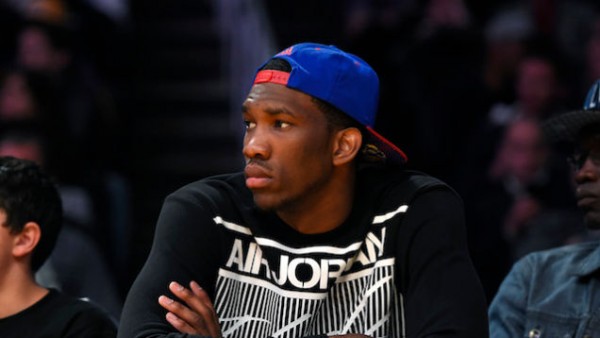 What’s going on with Joel Embiid? A third overall pick in 2014, he won’t be making his NBA debut this season as well after his foot has healed up well enough. The Philadelphia 76ers did announce he was going to have surgery, but what’s actually going on?

Reporters trying to get answers from president and general manager Sam Hinkie or others working for the franchise haven’t been getting answers. On June 13, the Sixers announced that Joel and Sixers personnel traveled to Los Angeles for a series of routine exams. During his visit, a standard CT scan on Joel’s right foot revealed less healing than anticipated at this point.

Then came July 11, when it was made clear Embiid would miss the entire season, and that he should have surgery on his re-broken navicular bone (right foot) within 7 to 10 days. But since then? Nothing.

Embiid made appearances on the sidelines during Summer League in both the Utah and Las Vegas. He was actually seen running up the steps, and he wasn’t wearing any protective boot, or walking with any kind of problems. By then, the Sixers knew he was going to have surgery, yet he didn’t look like someone that’s preparing for one.

There are a number of possibilities here as to what’s actually going on. Maybe Embiid doesn’t want to get the surgery done and is being pressured by the Sixers? In his June 13 announcement, Hinkie said that Embiid didn’t experience any pain before the CT. Maybe he simply had surgery and a team that’s asking the fans to be patient for a number of years, don’t feel like saying anything?

No one knows, and it’s all guessing games at this point. Embiid would have been the number one overall pick had he not picked up his injury before the draft, but that’s in the past. Now, it’s looking more and more doubtful he’ll ever play in the NBA, let alone become a dominant big man in it.