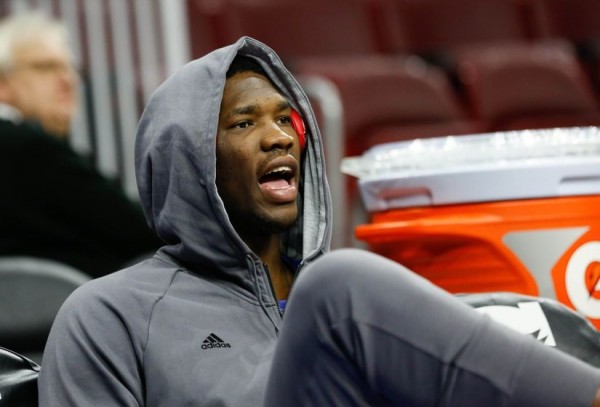 Odds are Joel Embiid is going to end up being one of the biggest draft busts of all time if he actually ever plays for the Philadelphia 76ers. With the season they’re having, him getting slightly better and closer to return is the best news they can get.

The Sixers are 0-15, looking like they are on their way towards setting a new record for losses to start a season. But this post isn’t about Sam Hinkie and the awful job he’s doing, constantly promising the team is three years away from competing. It’s about Embiid, a third overall draft pick who has missed his would-be rookie season and is on his way to miss the entire second one as well.

Embiid isn’t coming back this season, but the Sixers are content, which they weren’t last season, from his approach to rehab. Eventually, it seems that if he ever gets to play in the NBA or not isn’t up to him, but up to his so-far fragile body, but being positive and mature about it, two things singled out in the latest report, can’t hurt with a better return.

Patience is the key word for the Sixers. They waited a year for Nerlens Noel and at least individually, it seems to be paying off. Embiid? They have no choice but to wait until he gets back. The Sixers aren’t counting on him to become a building block of their franchise anymore. They probably know it was a mistake to take him. However, it’s not like they have much of a choice. It’s not quite clear when Hinkie is planning on trying to win, but maybe it happens at the time Embiid becomes an NBA player for the first time.