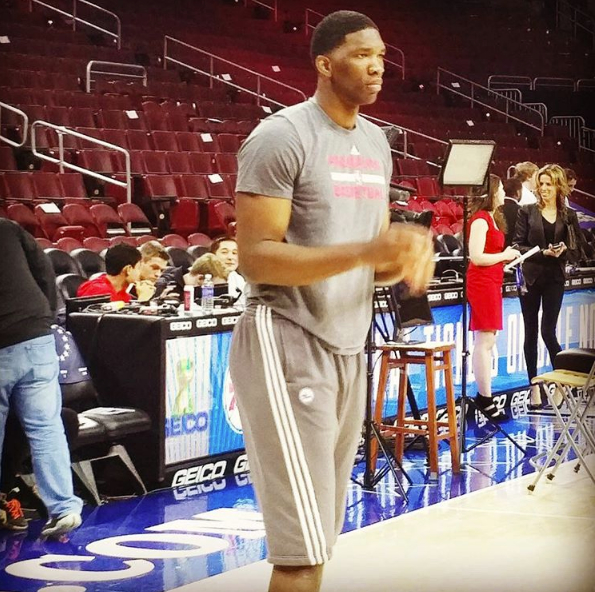 After two years of injuries holding him back from making his NBA debut, 2014 draft pick and former Kansas player Joel Embiid is getting ready to finally get on the court for the Philadelphia 76ers, a team that’s lost so many games over the last few years, it sees a rookie in a two-year delay as its potential savior.

All this offseason videos of Embiid working out have been posted online, showing how quick, strong and good the Cameroonian center is. Now 22, Embiid makes the 76ers frontcourt even more crowded than before, joining Nerlens Noel (who also missed a year because of injury), Jahlil Okafor and Ben Simmons, the number one overall pick in the 2016 NBA draft. Embiid hasn’t played a basketball game under some sort of team affiliation since 2014.

A basketball player since the age of 16, Embiid played high school basketball in Florida before going to Lawrence and playing one year under Bill Self, with Andrew Wiggins as a teammate. If it wasn’t for his foot injury, he would have been the number one or number two pick alongside Wiggins. He’s been compared to Hakeem Olajuwon, the player Embiid modelled his game after. And with all this life story behind us, the Sixers, after three years of blatant tanking, are counting on Embiid to be one of the cornerstones in their attempt to finally win some basketball games.

For now, it seems everyone covering the Sixers or getting hyped about them is forgetting one thing: Embiid had a broken navicular bone in his foot, surgery, and then another surgery when his recovery didn’t go as planned. He’s as rusty as possible when it comes to playing a basketball game in the NBA. He can turn out like Blake Griffin, who missed his original rookie year with an injury, and became the harbinger of a new age for the Los Angeles Clippers. He can also turn out like Greg Oden, who missed his original rookie season, and never really managed to avoid injuries for too long.

Embiid averaged 11.2 points, 8.1 rebounds and 2.6 blocks per game. He’s an old school center in a league that’s anything but that kind of basketball, although it doesn’t mean he won’t be good in the NBA. He might be excellent. It’ll be less his playing style that holds him back. Instead it will be his fragility or toughness that determines whether he has a long NBA career. Big men survive trends, because they’re always needed in one capacity or the other. Injuries, however, can end a promising career very quickly and cruelly, which is why getting too high on Embiid is a dangerous path to follow, which might lead to painful disappointment.