Big Baby Wins it For Boston at the Buzzer, Ties Series at 2-2 With Magic 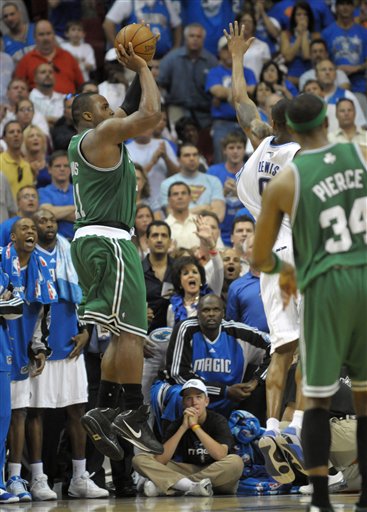 It wasn’t Paul Pierce, it wasn’t Ray Allen. Glen “Big Baby” Davis hit the last two jumpers for the Celtics and gave them a tough road win in Orlando, 95-94, bringing the helms back to the Celtics. The series is now tied 2-2 and heading back to Boston.

Courtney Lee helped the Magic gain the lead in the closing minutes, Glen Davis got the lead back at 93-92. Rashard Lewis hit two free throws to give the Magic the lead with 11.3 seconds to go, but then came Davis. Orlando trapped Paul Pierce who found an open Davis in the corner and that was that. Glen Davis almost trampled a little kid during his celebrations.

Boston enjoyed a very good third quarter but both teams never really broke away from it’s opponent, with the biggest lead in the game recorded at 9 for the Celtics at one point. All 5 starters scored in double digits for the Celtics and only Marbury added 2 points from the bench. Paul Pierce with 27, Glen Davis with 21 and Rajon Rondo had 21 points with 14 rebounds. By the way, Rondo is averaging 18 Points per game, 9.1 rebounds and 11.3 assists in the playoffs.

Orlando didn’t hit the three point shots they usually do, finishing with 5 for 27 from downtown, 18.5%. For a team that’s heavily relying on perimeter shots, that’s a number you can’t win with. Dwight Howard with 23 points and 17 rebounds and Rashard Lewis with 22 points were the good for the Magic, Redick and Alston combined for 2 of 14 from the field played as the bad.

Good news for Orlando: Perkins has reportedly injured his shoulder, allowing maybe less 3 point maddness and more solid inside points which seem to be more reliable this series. Game 5 in Boston on Tuesday.