No Ming? No Problem. Rockets Take Down Lakers in Game 4 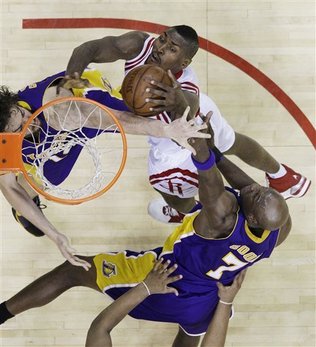 “I think everyone but us got the memo that we weren’t supposed to show up today without Yao.” All right reserved to Shane Battier.

I guess everybody, including us at Sportige.com didn’t believe in the Rockets without Yao. We forgot about the fact that Houston are 3-0 all time against the Lakers when Yao Ming doesn’t play. I wonder for how long that streak can last.

The Houston Rockets came up huge in last night’s win, beating the Lakers 99-87 leading from the get go, never dropping the lead once. Their biggest lead came in the third quarter, 29 points and the scoreline lies about the game. It wasn’t that close.

Aaron Brooks scored 34 points, a career-high for the point guard who is going through the motions these playoffs. Shane Battier finally showed up offensively, hitting five 3pointers, finishing with 23 points. Luis Scola added the grit, with 11 points and 14 boards while Kyle Lowry added 12 from the Bench. Ron Artest? They didn’t need him tonight on offense. He scored 8 points in a horrible outing, shooting 4 for 19 from the field, including 0 for 6 from three point range.

The Lakers? They just didn’t put in the effort the Rockets did. Pau Gasol finished with 30 points, but he was the only one who performed. Kobe was limited to only 15 points, the lowest for him in these playoffs so far. With Lamar Odom scoring only 2 points and no savior from the bench the Lakers just couldn’t keep up with the flying Rockets who seemed to play more freely and quickly than they do when Yao is on the court. Are they a better team without him? No. Kobe won’t catch a night like this again, Odom probably won’t as well. But the Rockets showed they aren’t going down without a fight, Yao Ming or no Yao Ming.