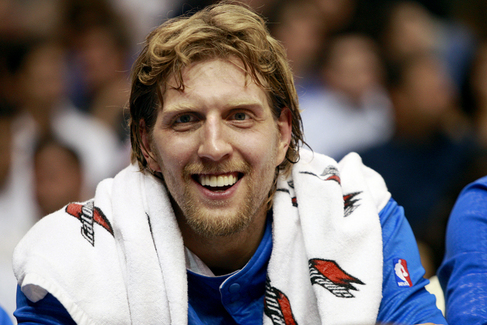 Dirk Nowitzki went over 40 for the first time in these playoffs but it was his fourth 30+ game in the last 5. And finally, he got the win over the Denver Nuggets. The Dallas Mavericks might not win again in these playoffs, but they at least they got one at home last night. And it wasn’t easy.

The Dallas Mavericks beat the Denver Nuggets 119-117 to make it 3-1 (Denver lead in case you’re wondering) as the series heads to Denver. They trailed the entire game behind the Nuggets until finally getting a breakthrough in the fourth quarter and held on to the lead. Carmelo Anthony hit a three with 3.1 left on the clock to make it a point game but Jason Terry hit his first free throw, missed the second (on purpose it seemed) and the Nuggets didn’t have enough time for a last shot.

Dirk Nowitzki had 44 points and 13 rebounds in another great post season game from him. This time he had help. Josh Howard who has been horrible in this series so far scored 21 points and four more Nuggets scored in double figures. Dallas out-rebounded Denver 50-34 in a game which saw 7 players whistled for technical fouls.

Denver Nuggets blew a playoff career high night from Carmelo Anthony who scored 41 points. Chauncey Billups scored 24 while J.R. Smith added 19 from the bench but Kenyon Martin scored only 2 and fouled out late in the game in an abysmal outing for him.

Can Dallas do something in Denver? Seem highly unlikely, but who knows… If Howard slowly get back into form and they get one good performance from the bench (Jason Terry, you listening?) they can give Denver some problems like they did last night.