Here are the 10 tallest men to play the game of basketball in the NBA. Some are lucky to be here just for their height and are hardly known to anyone not deeply involved with basketball, while others completed a very respectful and successful career in the NBA.

Here are those giants of the league throughout it’s history, with recaps of their career and some highlights for those who did enough to deserve a highlight clip. (hint: there’s more than one player on this list that didn’t get one. I guess when your career in the NBA carried on for a total of 3 minutes, you don’t deserve one). 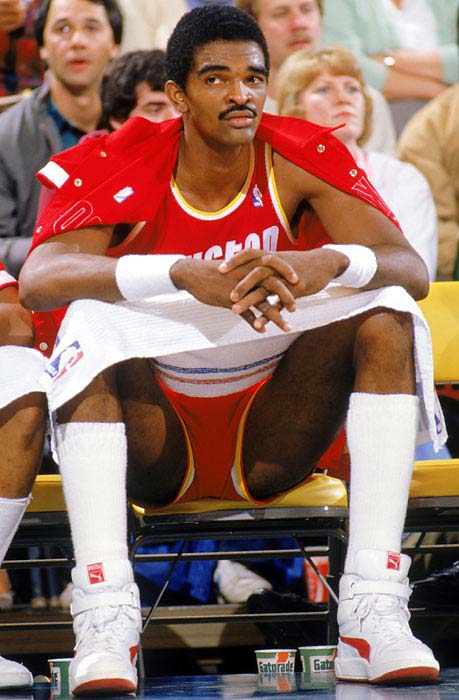 Ralph Sampson to this day is still considered one of the greatest players in the college level, leaving Virginia with 3(!!!)  Naismith national player of the year awards. He was expected to dominate the game once becoming pro and hyped as being an heir to Chamberlain and Russel. He started out pretty well, winning Rookie of the year award for the 83-84 season after being picked 1st by the Rockets in the 1983 draft. The 1984 draft added the Rockets with another big man phenom, Hakeem Olajuwon. The two were nicknamed “The twin towers” and enjoyed a fruitful partnership their first 2 seasons together, reaching the NBA finals in 1986, losing to the Boston Celtics.

Following the 1986 season Sampson began picking up injuries that riddled the rest of his career and never allowed him to return to the level of this first seasons, and after being traded to the Warriors in the 87-88 season never managed to become a significant contributor to any team he was on, finally retiring in 1992 after playing 8 games for Spanish club Unicaja Ronda. Sampson left the game at the age of 32, finishing a short and disappointing career as to what was expected of him when he came out of college. 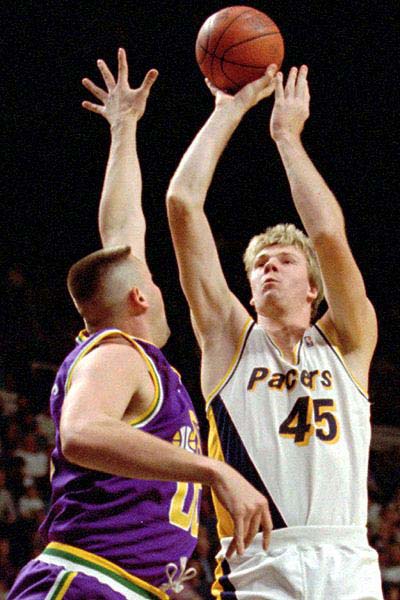 The Dunkin’ Dutchman played his entire NBA career for the Indiana Pacers and is still one of the all-time fan favorites there. He was drafted by the Pacers in the 1988 draft coming out of Marist College as the no.2 overall pick. Despite starting his first season as back up for Steve Stipanovich he took over as starting center after Stipanovich ended his career with a terrible injury. Smits took the chance with both hands and ended up on the All-Rookie first team that year, which was followed by a solid and successful career in which Smits scored in double figures each season he played, 95-96 being his best when he averaged 18.5 points per game.

Rik Smits went to the 2000 NBA Finals with the Pacers where they would lose to the Lakers in 6 games, and following that series Smits retired, stating his career long foot problems as the main cause. 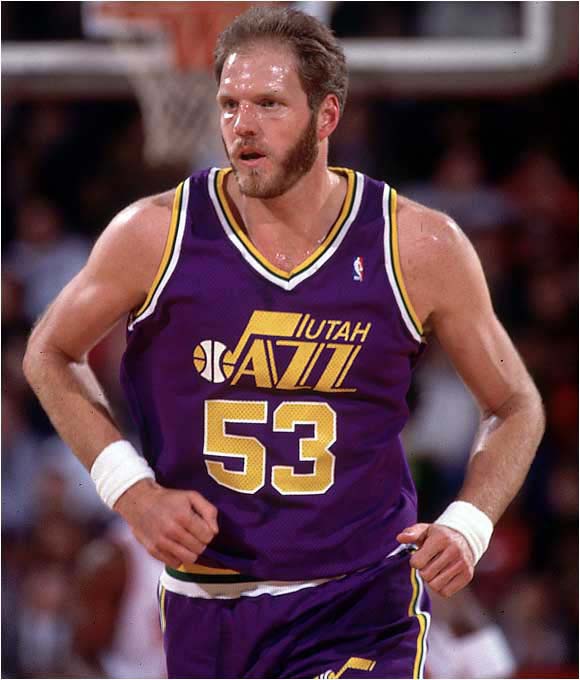 It’s probably a freak accident that Eaton got to play in the NBA. He preferred Water Polo to Basketball during high school and served as auto mechanic for a few years after high school, only to be discovered by an assistant coach from Cypress Junior College. He played there before transferring to UCLA where he received very little playing time.

Despite not making any real impression with UCLA he was picked by the Utah Jazz in the 1982 draft,, going in the fourth round. Eaton made an immediate impression showcasing his defensive abilities, and soon grabbed on to the starting center job for most of his career with the Jazz.

In his prime Eaton was an amazing shot stopper and defensive force, winning NBA defensive player of the year twice(1985, 1989). During the 1985-1986 season Eaton blocked 5.56 shots per game, an NBA record. His career average of 3.5 is higher than any other player who played in the NBA. Eaton remained a premier shot blocker and defender during the late 80’s and early 90’s until injuries started taking their toll and forced Eaton to retire after the 92-93 season. 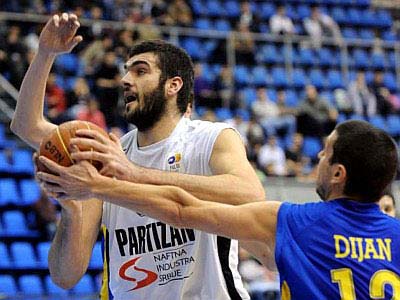 Vranes probably suffered from being so tall at such a young age, cause people actually expected him to be as good as he is tall. At 18 was already snatched by Turkish giant Efes Pilsen but was moved around until the Knicks (of course) saw some sort of potential in him and decided to pick him in the 2nd round of the 2003 draft. He didn’t get to play for the Knicks and was signed by the Portland Trailblazers, only to play one game for the team before his NBA career came to an end. Since he has moved back to Europe, playing for Partizan Belgrade currently in Serbian League and the Euroleague.
NBA career stats: 1 season, 1 game, 3 minutes, 1 missed field goal, 1 personal foul. Competes with Lauderdale for the worst player on this list. 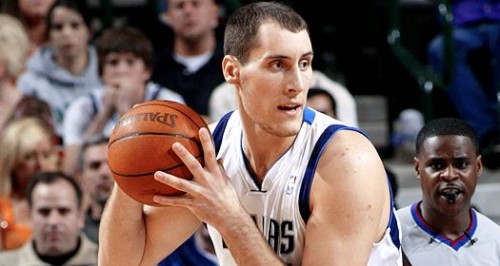 The 21 overall pick in the 2004 NBA draft, Podkolzin amassed a total of six NBA games, scoring 4 points, playing for the Dallas Mavericks. Since then, it’s been the Russian League for him. 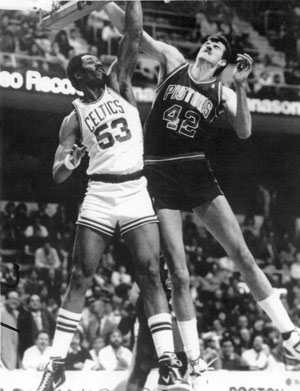 There’s an old basketball saying by Red Auerbach which said “You can’t teach height” and that’s pretty much the story about Chuck Nevitt. He was in and out of the league, he was on and off teams. He got to play for the Lakers, Bulls, Pistons, Rockets and Spurs and even got to be on the 1985 Lakers championship squad. If you add up his career minutes played total you get 18 total games played. He never played more than 43 games in one season, about half an NBA season. At least he got to be around some true legends. 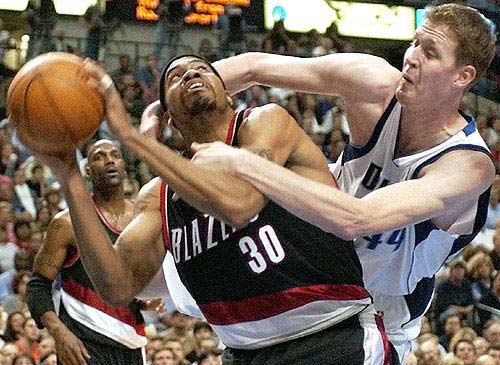 Bradley got picked no.2 in the 1993 draft by the 76’ers and that probably hurt the beginning of his career, as he was expected to be a savior of a sick franchise at the time. Bradley, like Eaton was a great shot blocker but wasn’t as big as Eaton, thus suffering against strong inside men. Bradley was notorious for picking up fouls very quickly which limited his playing time. Only after moving to Dallas in 1997 it seemed Bradley was picking up and really getting comfortable with the NBA game, but after a few seasons, like every tall and lanky player, injuries started mounting up on his back and legs and his playing time and availability slowly started diminishing until he eventually retired after 2004-2005 season. 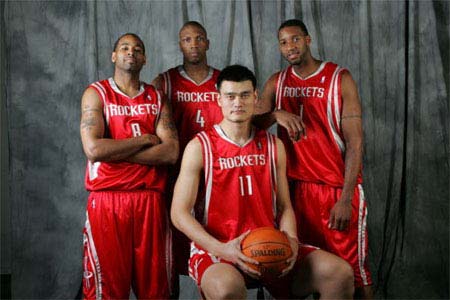 Recently retired, Ming hardly played any basketball after going down in the 2009 NBA playoffs against the LA Lakers. Heading up to the 2011-2012 season, Ming announced his retirement, sparking debated about his eligibility regarding the NBA hall of fame. Probably the most talented offensive player on this list, Ming, while certainly a game changer in terms of spreading NBA popularity across the globe, didn’t do enough in eight seasons with the Rockets to claim a berth in the Hall of Fame, in my opinion.

NBA career stats: 8 seasons, 486 games, 32.5 minutes per game, 19.0 points per game, 9.2 rebounds per game and 1.9 blocks per game. He has taken part in 6 all-star games, usually receiving more votes than any other player because the vote is available on the Internet for users from all over the world. 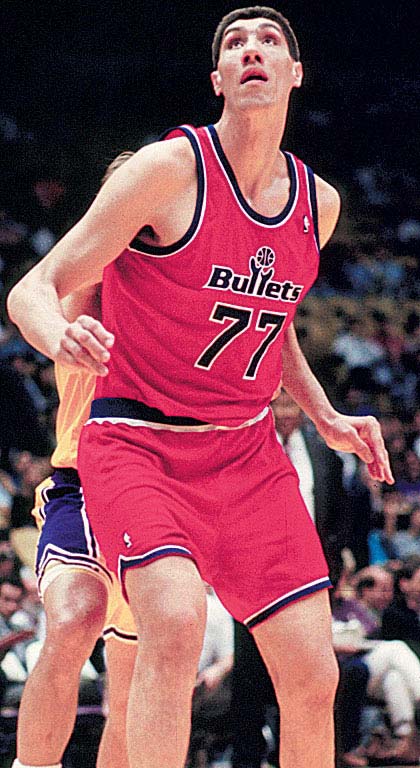 He shares the title of the NBA’s tallest player ever with Sudanese born Manute Bol. Muresan, born in Romania has a pituitary disorder that is the cause for his great height. After playing for Cluj University he moved to France to play for Pau-Orthez, where he caught the eye of NBA scouts, and in the 1993 draft was picked by the Washington Bullets (Wizards today). Despite a promising start, injuries plagued his rookie season.

A good 94-95 season was followed by an even better 95-96 in which Muresan scored 14.5 points per game, grabbed 9.6 rebounds per game, blocked 2.3 shots per game and led the league in field goal percentage. He won the most improved player of the year award in the end of that season.

96-97 Wasn’t as good, and injuries plagued  the rest of his career in which he was able to play only 32 games in the next 2 seasons for the New Jersey Nets. He played another 3 seasons back in Europe before retiring and moving to live in the United States. 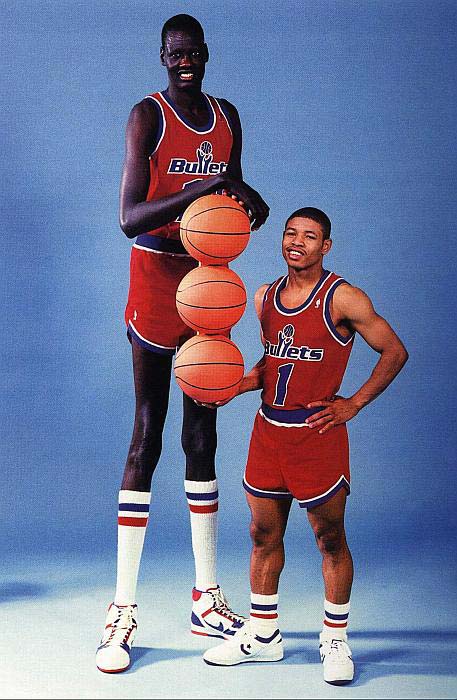 Together with Romanian giant Manute Bol is the tallest player to play in the NBA, and one of the nicest and popular among fans and teammates. Manute Bol had a tough time before starting his NBA career, being declared ineligible to play after being picked in the 1983 draft. It took him another 2 years before finally making it, being picked in 1985 draft by the Washington Bullets.

In his first season he set an NBA record for Rookies, blocking 397 shots, averaging just under 5 blocked shots per game. Despite his blocking skills Bol had many problems in the game because of his super-thin physique which troubled him against many of the stronger inside men of the league.

Later in his career Bol became fond of shooting 3’s, which in one season he hit 20 of them. In blow out games it became a very popular habit for him and fans who enjoyed watching the giant chucking uncontested 3’s. In the 92-93, playing for the 76’ers, Bol hit 6 out of 12 in one game, with fans chanting “shoot” each time he touched the ball around the arc.

Like most players on the list, after the first few healthy years Bol started missing large portions of the season due to injuries that eventually ended his career in the middle of the 94-95 season. His final 2 seasons were more of a teacher job for him, mentoring Shawn Bradley and Gheorge Muresan as they developed into legitimate NBA Centers.