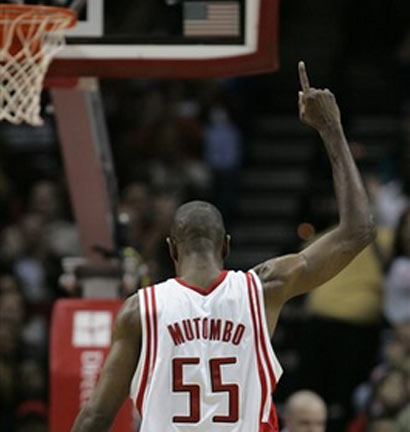 After going down in the Rockets Blazers game two nights ago and discovering the severity of his knee injury, Dikembe Mutombo announced his retirement from the NBA and the game of basketball.

Mutombo was the oldest player still active in the league and was actually semi retired in the beginning of this season. In December 2008 he was signed for the remainder of the season to be Yao Ming’s backup, in what he called his “farewell tour”.

Mutombo retires as one of the greatest defensive players and shot blockers in the history of the NBA. He has won Defensive player of the year 4 times (1995, 1997, 1998, 2001), an 8 time NBA All-Star, 5 time was the league’s Blocked Shots leader, 2 time the league’s  Rebound leader. He is second on the all-time blocks list, trailing Hakeem Olajuwon. He is also one of only 2 players to win the Defensive player of the year award 4 times (Ben Wallace being the second).

He reached the finals of the NBA twice, once with the 76ers and a year later with the New Jersey Nets, losing both times.

One of NBA and sports in general greatest humanatarians, Mutombo has more time now to donate his wealth and money to people and places in need in his home country, Congo. Here’s a great video about the man with longest name and the biggest smile we had in the NBA.