The conference split of the 11 oldest stadiums in division I college football, all built in 1922 or earlier, gives the SEC the edge (four), followed by the Big Ten (two), Pac-12 (two), Big 12 (two) and one for the ACC.

Before the list begins, one mention goes out to Nippert Stadium (thanks reddit). It started hosting the Cincinnati Bearcats games back in 1901, but it was more like a field with wooden bleachers around it than a stadium (and called Carson Field at the time). In 1915 they finally began construction on the concrete structure, and in 1924 it opened as Nippert Field. The Bearcats played their games during that time in other Cincinnati parks as well

Also known as the horseshoe or the shoe, it’s been the home of the Ohio State Buckeyes since October 7, 1922. Currently, it can seat 104,944 fans, but originally its capacity was for 66,000, undergoing multiple expansions over the years, the most recent of them in 2014. Home of the Vanderbilt Commodores since October 14, 1922, it can seat over 40,000 these days. When it opened, its capacity of 20,000 dwarfed Tennessee’s Shields-Watkins Field, which had a capacity of just 3200.

Opened on September 24, 1921, it has been the home of the Tennessee Volunteers ever since. Initially its capacity was only 3200. The stadium has undergone 16 expansion projects, at one point reaching a capacity of 104,079 before being slightly reduced by alterations in the following decade. Now it can seat 102,455.

Home of the Kansas Jayhawks football team since 1921, Memorial Stadium opened on October 29, 1921. The stadium is dedicated as a memorial to the KU students who died in World War I. It has a capacity of 50,071. Opened on November 27, 1920, it has undergone three massive renovations, the most recent of them in 2013. Its capacity is 70,083, and the view from the open end overlooking Washington lake and the Cascade mountains is one of the best in the nation for those who like a little bit of scenery to their football games, which sometimes takes the mind off Washington Huskies disappointments.

Opened on October 2, 1920, it was actually Lewis Field until 2003 when the university’s (Oklahoma State) sugar daddy, T. Boone Pickens, got it named after him with the ceremony taking place in a game against Wyoming. It started out as an 8000-seater back in the 1920’s, but has grown to 60,218, the last expansion taking place in 2009.

Getting closer to its 100th birthday, the Wisconsin Badgers Camp Randall opened on November 3, 1917. The name comes from a former Union Army training camp during the Civil War. The camp was named after then Governor Alexander Randall, who later became Postmaster General of the United States. It can seat 80,321.

Opened on October 1, 1915, it can seat 59,347, but will be able to hold over 64,000 from 2016. When the stadium opened, it was named for Judge William Hemingway, a professor of law and chairman of the university’s committee on athletics. The Vaught name was added in 1982, after Ole Miss’s former coach. 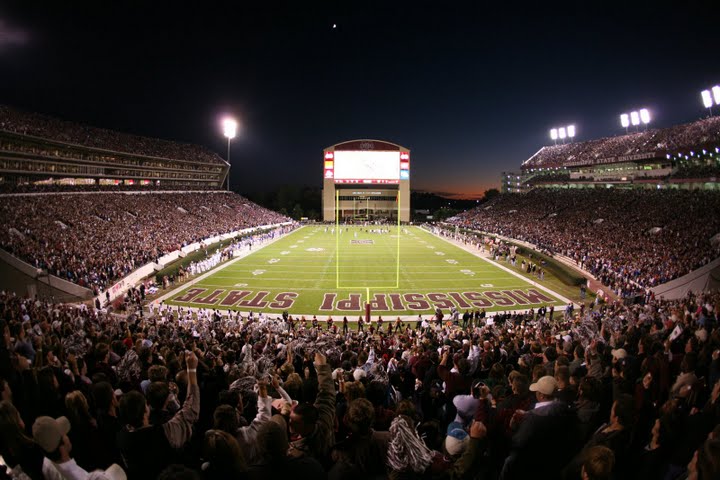 When it opened in 1914, it was called New Athletic Field. Six years later that changed to Scott Field in honor of Don Magruder Scott, a football star for Mississippi State and an Olympic sprinter. In 2001 Davis Wade, a massive contributor to the university and the stadium’s expansion, got his name as the headliner, while the field itself retained Scott’s name. It can seat 61,337 fans.

The oldest stadium in division I college football is in Atlanta, and home of the Georgia Tech Yellow Jackets on September 27, 1913. It was known as Grant Field, named after Hugh Inman Grant, son of John W. Grant, a well-known Atlanta merchant and original benefactor of the stadium. It was changed to Bobby Dodd, the team’s greatest head coach, in 1988, although the playing field retained the Grant name. Its latest expansion, in 2003, left it with the ability to host 55,000 fans.