Sportige
Home Soccer Ugly As It Gets…

After last night’s horrendous tackle by Ryan Shawcross (who, amazingly enough, received a few hours later a call up from Fabio Cappello for the friendly against Egypt) on Aaron Ramsey’s poor leg, Sportige decided to reminisce some of football’s most horrific injuries… One of the most horrifying injuries in recent years and one surely not to be forgotten by anyone who saw this back then in 2000 when Celtic played against Lyon in a UEFA cup clash. Henrik Larsson tried to challenge Lyon’s Serge Blanc in the 12th minute of the game and the clash of legs led to a broken ankle which left Larsson out for the rest of the season. The ironic side of this incident is that Blanc would latergo on to score the winner. In spite of this horrible tackle Larsson got back from this  injury and was one of the most prolific scorers ever in the SPL. Peter Schmeichel’s reaction to the injury (he is reputed to have vomited on the pitch) says it all. Busst, Coventry’s defender, tried to get the ball after an in-swinging corner but collided with Irwin and McClair. The injury proved to be career ending for Busst, mainly because of the infections suffered afterwards. The match was delayed for 12 minutes due to the cleaning of the blood from the pitch.

Jimmy Bullard, certainly one of the most beloved players in English Football, for his love for football, antics off field and his famous video cameos on Soccer AM, dislocated his kneecap after his challenge with Scott Parker proved to be a season ending one. Nevertheless the iconic Bullard returned from injury for the second half of the 2007-2008 season helping Fulham avoid relegation and receive an England call-up. Cisse, who just transferred from Auxerre suffered an injury which was almost career ending (in a friendly in 2006 just before the World Cup Cisse suffered a similar leg breaking injury which left him out of the tournament) after he tried to get the ball as his leg seemed to be caught in the ground and a collision with the leg of McEveley caused a shock injury for the striker. Cisse would return to the squad later on that season and help Liverpool win their first European Champions Cup in 21 years.

Definitely the most brutal tackle in this article, as Oupa Nguluba, Carara Kicks’ player (who were leading 1-0 at that moment), ran for the ball on the right side of the pitch and Musasa ran in order to stop him, with a violent foul which will see him suspended for a long time. Musasa’s statement “It was the first red card that I have ever received in my career which shows I am never one to go in with the intention of hurting others” seems laughable after you see the video. Even more shocking then the previous tackle, this one features Wasilewski, Anderlacht’s right back slides towards the ball while Standard Liege’s 21 year old midfielder Axel Witsel just stumps on his leg with a seemingly definite intention of hurting the guy. Wasilewski suffered from numerous open fractures which will see him sidelined for 13 months. Oh, and Witsel got an 8 match ban for this stunt a crusade kicked off against him from Anderlecht and Polish fans which saw life threatening letters sent to his home. A malicious attack by Martin Taylor saw Eduardo injured for a year until his next comeback in last season’s clash against Cardiff. The Croatian striker was stopped by Taylor after he passed the ball and was immediately screaming in pain. Wenger later said that Taylor should receive a lifetime ban for that offence while others said in his defence that in no way he would do a tackle like that, deliberately. 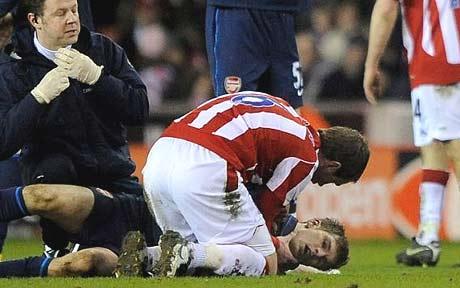 I guess that’s the price Arsenal has to pay for their beautiful football. After Shawcross received a red card he burst into tears which implements his regrets for the tackle he made on young Ramsey who will be surely sidelined for a long period of time.