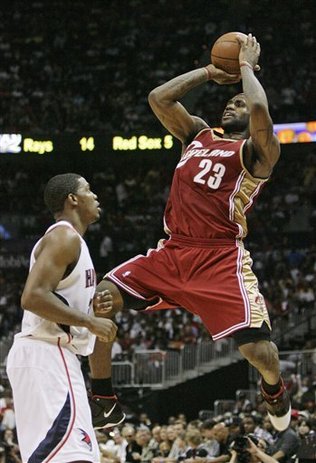 Get out your brooms, cause another sweep is a’comin’. Atlanta made it a bit more difficult this time, hanging on with the Cavs for about two and a half quarters before Lebron pressed on the nitro button and zoomed past them, to make it 3-0 in the series.

The MVP finished with 47 points (25 in the second half), 12 rebounds and 8 assists, the second player in history to record at least a 45-10-8 game. The first was… Michael Jordan. Makes you wonder…

Only 6 players scored for the Cavs, but Lebron’s 47 more than covered for the rest. The Cavs maybe didn’t score, but they controlled the boards. 46-23, that was the rebound stat line of the night. Amazing. The Hawks were able to rally back in the third and go within 3 of Cleveland with Flip Murray leading the onslaught, but Lebron cooled them down pretty quickly. He somehow ended up facing Bibby after a good screen, and that was pretty much the best thing he could ask for.

Joe Johnson was fit and played 45 minutes, scoring 21 points and Josh Smith added 18 with a couple of nice dunks, but it wasn’t enough against Lebron and that Cavs defense which took it up a notch in the second half. Atlanta need a miracle to get a win in this series. It doesn’t look like they believe in miracles.

One response to “Lebron James and the Cavs rout Hawks Again, Win 97-82”