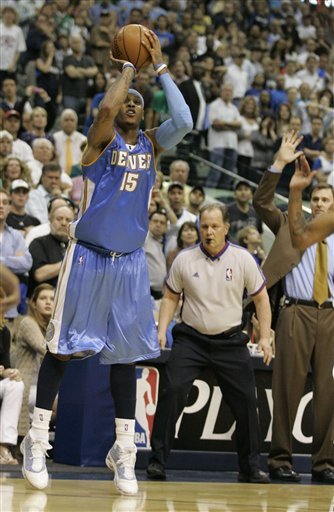 The Dallas Mavericks are a totally different team at home, and their 17-1 home record since the All-Star break is proof of that. That one loss though? It was to the Nuggets. The Game was tight all the way with no team leading by more than 6 points at any stage of it.

The Mavs had a 105-101 lead with 31 seconds left before Anthony scored a quick two. Nowitzki missed on the other end before the final play. Rick Carlisle instructed Anthony Wright to foul Anthony as the Mavs still had a foul to give. Wright seemed to foul him, but it didn’t seem that way to the refs who didn’t blow the whistle which enabled Carmelo to pull up and hit that winning tre pretty much uncontested.

In my eyes the refs blew that call, and Mark Cuban, Josh Howard and the rest of the Mavs were letting the refs know about it. The league released a statement shortly after that acknowledged the fact that the refs should have called a foul.

So Dallas are now 3-0 down despite Dirk Nowitzki’s 33 points and 16 rebounds. No team has ever made a comeback from 3-0 down to win a series. The Nuggets survived their horrible start to the game, missing 15 of their first 17 shots. Luckily for them Dallas didn’t do much better and couldn’t capitalize on that. Chauncey Billups finished with 32, Carmelo Anthony with 31.