Final Four is Set and Ready to Go 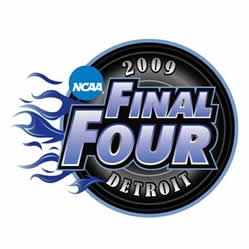 Here we are, Final Four 2009 is ready to go. The Big East managed to get two into Detroit, Uconn and ‘Nova, with Louisville being upset and outplayed by Tom Izzo and his Michigan State Spartans. Uconn beat Missouri leading almost all of the way and with Villanova doing them a favour by knocking out Pitt in dramatic fashion, Calhoun’s guys have no one to fear anymore. North Carolina handled Oklahoma rather easily. Don’t let Blake Griffin’s numbers tell you otherwise. It wasn’t even close.

Friday we made a prediction about who will advance and who will fall, take a look here to see if we got things right. I feel pretty good with myself(Small hint). Out of the 3 players we picked to dominate the tournament, only one remains, Ty Lawson of UNC, who pretty much did anything he wanted against the Sooners and anyone they faced so far.

Here’s a round up from the Weekend Action, with Video highlights to entertain your reading.

The game was very close for most of the way, but Uconn broke free in the final 5 minutes and Missouri were never able to catch up again. Kemba Walker was the star this night for the Huskies, scoring 23 points(career high) and dishing out 5 assists. A.J. Price scored 18 and Thabeet brought down 13 boards while scoring only 5, but Walker’s outstanding play was enough to compensate for the big guy. The Tigers were able to come back from an 11 point deficit in the first half to even hold the lead for a moment in the second half, but eventually will look at their inability to convert Uconn’s turnovers(17!!) into points(only 13 off of them). A.J. Price was named most outstanding player of the West region. He has averaged 20 points per game, 4.5 rebounds and over 5 assists per game. Calhoun is taking his team for their 3rd final four, and remember, they’ve won it all on their last 2 appearances, in 99 and 04. Now it’s Michigan state on April 4th.

Probably the upset of the Regional finals. It seemed Louisville were the hottest team in the nation last week, but Michigan State handled the Louisville notorious pressure game pretty well, countering with tough man to man defense that seemed to surprise Pitino’s guys. It was pretty tight up until 6 minutes into the second half, when Michigan State took the lead for good and never looked back. Goran Suton was the man again for the Spartans, scoring 19 points and grabbing 10 rebounds. Michigan State are now headed for their 5th final four in 11 years, more than any other program in that time span. Louisville, like last year leave the tournament at the Regional Finals and will be frustrated mostly about their inability to score in the final 5 minutes.

Probably the best game of the Tournament, this Big East battle lived up to the expectations in a tough, physical yo yo match. Although Pitt were no.1 in the Big East when the season ended, Villanova were not a team they wanted to meet, after losing to them during the regular season. Villanova were dominant throughout most of the first half, but Pitt closed that half well.In the 2nd half both teams exchanged the lead throughout the entire 20 minutes. Levance Fields tied the game at 76 with 5.5 seconds to go with 2 FT’s, but Scottie Reynolds got the ball at about half court, and was able to win the game by penetrating the paint and kinda floated in the paint to win it for the Wildcats. Sam Young had 28 for Pitt, and Dejuan Blair scored 20 points and had 10 rebounds, but that was pretty much it from the no.1 seed. Dwayne Adnerson scored 17 for Nova, leading 4 in double figures, while he added 6 assists and 4 steals. Villanova now head to their 4th Final Four, and their first since 1985, the year they won it all.

North Carolina opened with a 13-2 run and never looked back. The closest Oklahoma got after that was 5 points, but the Tar Heels came to play and even on a pretty mediocre night from Hansbrough, Ty Lawson and friends were enough to put the Sooners away. Lawson had 19 points with 5 assists and Danny Green added 18 of his own to lead UNC for an easy win. Blake Griffin did score 23 and grab 16 rebounds, but that was hardly enough. He did finish the tournament with 28.5 points per game and 15 rebounds per game, but North Carolina had too much defense for the rest of the Sooners. They didn’t even need a great night from most of their guys. Griffin will probably bolt to he NBA, but Jeff Capel will try and convince him to stay in the weeks to come.UNC advance to their 18th Final Four, 7th for coach Roy Williams and grabbed their 100th tournament win.

So there we have it, North Carolina vs Villanova and Uconn vs Michigan State. I’m obligated to guess, so I think Uconn will beat the Spartans despite having home field advantage in Detroit (72’000 fans). I just feel they’re too good of a team and I don’t think Michigan State will surprise Calhoun like they did with Louisville.

North Carolina are my favourites to win it all. Despite the fact that I love this Villanova team and really enjoy watching them play, it’s hard for me to see them getting passed UNC, who just have too much firepower for anyone to handle them. From here, 4 days prior to the main even, I say It’ll be UNC vs Uconn in the finals, and we’ll see a 4th trophy going to Chapel Hill.