Final Thoughts Before Arsenal and Man U Clash Again 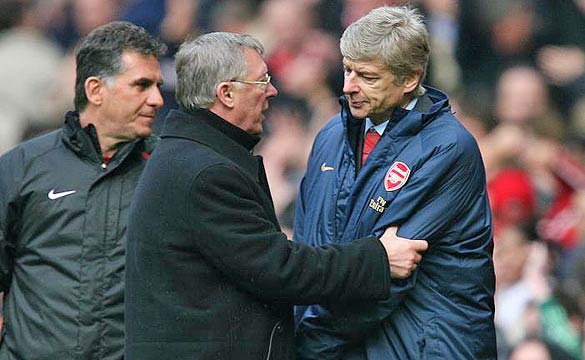 In about 90 minutes Arsenal and United take the field.

Can Wenger and his boys stop another Ferguson led “Team of Destiny”? For that he needs to score, and although Arsenal have done that quite successfully in the league in recent months, especially since Arshavin has signed with the team and Adebayor and Fabergas returning from the injured list, it isn’t going to be easy.

Arsenal didn’t look too good in the first game, some even called Wenger’s lineup and style of play cowardly. That’s an exaggeration, but he was cautious. Only Arsenal don’t know how to play cautious, and when they tried, it looked rather awful. It won’t be the same tonight in the Emirates. Arsenal will play it’s usual game, or at least try to take the game to United.

The key men for the Gunners will be Samir Nasri and Cesc Fabergas. Nasri can be brilliant at times, and sometimes seems to be wandering around the pitch aimlessly. He scored 2 when Arsenal beat United 2-1 in the league, back in November, back when Arsenal still believed it could make a run for the League title.

That game was won without Adebayor, without Van Persie (who’ll be starting on the bench tonight, probably). Only with Bendtner upfront and Fabergas and Nasri behind him in a great Arsenal victory at the time. Fabergas played his best game of the season that Saturday, and Arsenal need him in that form tonight. The form he had last season. When Fabergas is good, is focused, is accurate, he’s the best Midfielder in the world, even more than Gerrard, Lampard, Iniesta and Xavi. He hasn’t been that way this season.

Van Persie is another man who can produce for the gunners, but we don’t know how fit he is. When fit, he’s the top front man for the team. Yes, better than Adebayor. If he’s fit, I suggest Wenger use him a soon as possible, even start him. I would rather take my chances with him than with Walcott, who seems to be lost a bit after a great start to the season.

What about United? They don’t so many tips. They are, I repeat, they are the best team in the world today (Yes, I did see the Barca – Real game on Saturday). They aren’t playing very well this season, but they have enough to win anywhere and beat anyone. They’ve pretty much done exactly that this season so far. Arsenal can contain Ronaldo or Rooney, not both at once. From there, it’s up to the player, and which side he woke up on in the morning. United also tend to have luck on their side. And Statistics – United have scored on all three occasions they have played at the Emirates and it is seven seasons since Arsenal have beaten United at home with a result good enough to send them through. Arsenal have some stats on their side as well, but they have never beaten an English side in European competition.

Something will give. I just hope it’s a good game, better than the first leg. LET THERE BE GOALS.