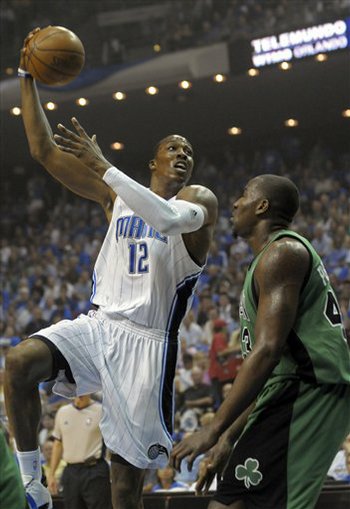 Paul Pierce wasn’t too bad actually in the game, scoring 27 and bouncing back from his awful game 2 performance (3 points) but he didn’t have much help. Eddie House gave 15 points from the bench, Rondo scored 15 and that was pretty much it. Ray Allen scored only 8 points in an awful 3 for 13 night. Add that up and you have the Magic winning and  now lead the series 2-1.

Orlando showed up without the suspended Rafer Alston, but didn’t seem to miss him too much. Dwight Howard was huge in the paint on both ends, finishing with 17 points, 14 rebounds and 5 blocks. Rashard Lewis with 28, Hedo Turkoglu with 24 and Anthony Johnson filling in well for Alston, adding 13 points.

The Magic just were too much for the Celtics on both ends most of the match, but like in game 1 had a mini – collapse, this time at the end of the third going into the fourth but bounced back, eventually leading as much as 25 despite Howard playing only 2 minutes in the fourth quarter.

If the Magic can get Lewish and Hedo like this every night, the series is theirs for the takin’. As usual, Van Gundy downplayed the win, saying “the situation in the series right now is like having a 1 point lead over the celtics at the end of the half.” Third quarter continues in on Sunday. Celtics need a consistent performance from more than 2 guys in the next game if they don’t want to fall into a 2 game hole.