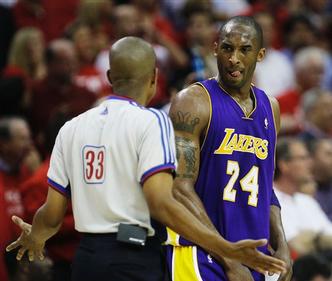 When Kobe hit that three with seconds to go in the third, making it 74-62, I think everybody new this was the Lakers game. The Rockets came back to withing 6 in the fourth quarter but couldn’t get closer than that. When the game was there to be won, in the third, they weren’t good enough, scoring only 14 points in that quarter.

Kobe Bryant scored 33 points, going 4 for 6 from three point range and surpassed Larry Bird on the All-Time Leading Scorers in the Playoffs list, reaching 5th. Jerry West lies ahead. Jordan Farmar looked going filling in for the suspended Derek Fisher, scoring 12 and adding 7 assists while Lamar Odom had a much better game than the first two with 16 points and 13 rebounds.

Ron Artest scored 25 points but went only 2 for 8 from three and was also ejected 40 seconds before the game ended after a controversial flagrant call on him. I don’t think that was a flagrant, but refs have an easier time showing Artest the way out than others do. We’ll see how the league acts on this today. I hope he doesn’t get suspended, cause the Rockets who didn’t look good last night have no chance without him.

Yao added 19 points but seemed to be troubled by guess… an injury, and his fitness for Game 4 will be determined in the next 2 days. Yao struggled scoring in the third, and despite his 6th straight double double had a disappointing game. The rest of the Rocket’s weren’t enough to match up with the Lakers who just seemed to be much more focused and in the game than Houston’s players.

Game 4 coming up, and Houston need to do something quick, cause the momentum has shifted over to the Lakers side. Kobe is just being aggressive and is doing whatever he wants in the past 2 games, and it seems like the rest are starting to up their level of play, following their leader. The Problem is Houston need a great night from too many people and right now it doesn’t seem like it’s going to happen 3 more times in the series. The Lakers can win with Kobe and just a bit more from the rest.