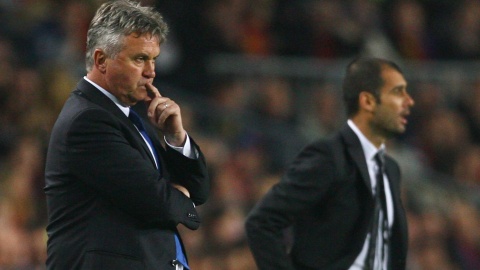 Is this really good vs evil? The beautiful soccer of the Catalan team vs the brute force of big bad Chelsea villains? Of course not. Chelsea did play an almost bunker type of soccer last week at the Nou Camp, but they did get the result they wanted and now are slight favorites to go through to the finals in my opinion. Manchester United did the same thing in last year’s Semi Final vs Barcelona, got the 0-0 draw in Spain and beat Barca 1-0 at England.

Mind you, this isn’t exactly the same Barcelona team of 2008. It’s the most lethal attack in European soccer today in the eyes of many with maybe the best player in the world, Lionel Messi. Chelsea won’t be Ultra Defensive like they were on the first game, but don’t expect them to go all gung-ho right from the start. Hiddink is a patient man, and he knows going on an all out blitz against Barcelona isn’t wise, not matter if you’re away or at home.

So what do Chelsea need to do? Attack the center of Barca’s defense as much as often. Puyol isn’t playing, and Caceres is no Puyol. Gerard Pique is not a bad player at all but isn’t dominant enough to lead the defense by himself. Barca who are facing the option of Thierry Henry not being fully fit for tonight’s game just might strengthen the midfield in order to help their defense from there. Chelsea will try to utilize Drogba’s aerial prowess and strength as much as possible, wtih Lampard, Ballack and Essien coming from behind, trying to break the Barcelona middle.

Barcelona will probably play their usual style, maybe a bit more careful than usual but Barca can’t play for score. They don’t have the score to defend and they’re just not that type of team. Today’s game will be won in the middle of the field – The Chelsea fearsome foursome vs Xavi, Iniesta, Yaya Toure and maybe Keita, if Henry isn’t fit after all.

I’m buying 3 goals like we had last night, I just hope the game isn’t over 11 minutes from the opening whistle. Give us some tension.